Vs 1 Noah floated for forty days, one the trackless seas No steering or navigation, just drifting on the breeze The rain had stopped after forty days, but of dry land there was none The mighty flood had covered it, but then there came the sun! CH 1 And Noah sent a messenger, the bird of peace some say To fly and find a sign of hope that dry land was on the way And in its beak on its return, the olive branch of peace! It seemed to send the message that man was again God’s friend Vs 2 Many years went by but it did seem man’s lesson he’d not learnt The rules of God he disobeyed, the Father’s feelings he hurt Those lumps of clay had lost their way, no matter what the prophets had done Another flood must have crossed His mind, but then there came the Son! CH 2 And God sent a messenger, the man of peace some say To come and show us signs of hope, God’s love was on the way And though He died upon a cross, for man’s sins he did pay And through His end, the message sent, man was again God’s friend Vs 3 Now three days after that sacrifice, a strange event took place, An empty tomb was evidence of man’s return to God’s grace For the risen Lord had conquered death, He’d won for everyone His Father’s constant blessings, rising like the Son!! CH 3 And Jesus was that messenger, the Prince of peace some say And through His human sacrifice, God’s love is here to stay Our loving Father’s blessing came, upon that Dove’s return! It message send, when man repents, God is indeed his friend The message send, when man repents, God is indeed his friend
Mark Bainbridge©1990

This hymn was written around the title, which seemed to come as an image of a dove flying aloft. (Maybe I’ve looked at too many Epic Theatre movies in my time.) However strange this may seem, over the period of a week the outline of the song became clear and a connection between Noah’s Dove bringing back an olive branch and Jesus’ Sacrifice on the cross and returning to the Father fitted together well.

It emphasises the loving nature of God and how we can all return to Him if we have “lost our way.” The play on words midway through each verse has an interesting effect on an audience 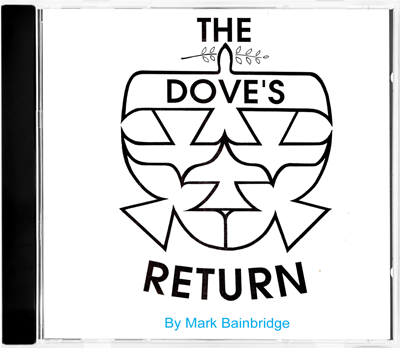