I walked in to a spooky house – A scary house A spooky house! And I heard ghosts (ghostly sounds) And I saw monsters (monster sounds) I heard little devils (devilish sounds) And I heard witches (witches laughter) And then – with a bang A big wind came And knocked me down And I, … got scared, … pretty scared, … very scared Cause I heard great big giant steps Great big giant steps! Making an Earth Tremor start. And the house to shake Then a whirlwind came Through the house it came Spinning my head around Making me fall to the ground! And when I looked up… I saw a door that was black! I opened the latch! The door opened slowly with a creak !! AND OUT JUMPED THE BOOGY MONSTER’S FEET!!!! And so I ran, from that house With those scary monsters chasing me!

This was written as an action song for a Halloween theme, however; the sound effects became the main ingredient and the children had a great time providing their own responses. Good Voice exercise and plenty of scope for the imagination. The Name – in honor of the master of the Suspense Thrillers, ‘Sir Alfred Hitchcock’.

There are a number of activities covering a range of areas on this theme including Drama, language development, and Art and Craft housed in the MEMBERS CONTENT area of this web page. As an example: Drama:


Buy A Delightful Dozen For The Classroom 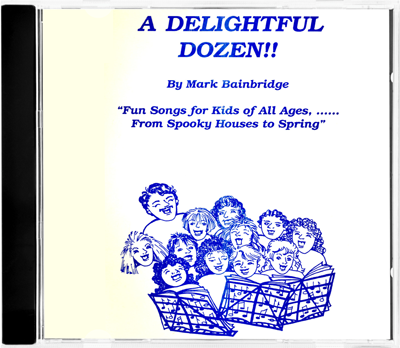