[Loosely based on Matthew 14: 22-33] Well I was there with the others in the middle of that sea The weather had turned bitter, as bitter as can be The water churned our stomachs as the waves tossed the boat And terror gripped our pounding hearts, fear seized us by the throat When through the spray a vision of a man upon the sea We rubbed our eyes and stared for our minds could not believe And then he said, ‘It is I, do not be afraid!” I said, “Lord, if it is you, bid me come upon the waves” And he said – “Come!”  He said – “Come!”   Well I stepped out of that boat and walked with confidence Upon that raging torrent, even though it made no sense But then I felt the howling wind, and waves climbed all around! Confidence gone, my FEAR grew strong,…it began to pull me down I waved my arms about at the thought of being drowned I called for help, but the wind snatched their very sound And as the depths began to swallow me I felt His hand upon mine saying, “Peter, why did you doubt?” And he said – “Come!”  He said – “Come!”   We climbed into the boat and the wind died to a breeze The water calmed the waves were gone, the sea took its ease We bowed before our Lord for the wonders we had seen He looked at us with loving eyes, our hearts burned with belief And he said – “Come!” He said – “Come follow me, follow me!” He said – “Come follow me, follow me!” And he said – “Come!”
Buy His-Story 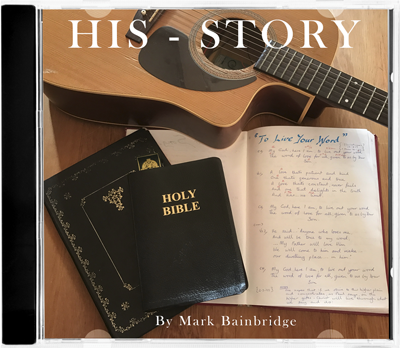